Comets fascinate me. They are wondrous visitors from the deep, cold fastness of space. The comet NEOWISE is in our sky now and it fills me with wonder. I have romantic ideas of space travel and seeking new adventures. But first, let’s quickly define some terms. Rogers (2013) provides some handy definitions.

And some further clarity s provided by Imster & Byrd (2014). “Asteroids are generally considered to be made up of metals and rocky material, while comets are made up of ice, dust and rocky material. Both asteroids and comets were formed during the earliest history of the solar system, around 4.5 billion years ago. Asteroids formed much closer to the sun, where it was too warm for ices to remain solid. Comets formed farther from the sun where ices would not melt. Comets, which approach the sun, lose material with each orbit because some of their ice melts and vaporizes to form a tail. Asteroids typically remain much more solid and self-contained, even when near the sun.” 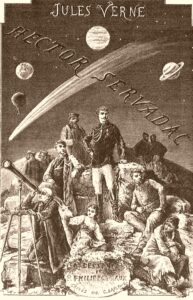 Now, back to romance. When I was a kid, it was Jules Verne who excited my imagination. He wrote science fiction first. He was before H. G. Wells, Isaac Asimov, Robert A. Heinlein, Arthur C. Clarke or even Arthur Conan Doyle (Professor Challenger, The Lost World). Verne wrote Off on a Comet in 1877. A comet bumps into the earth and Gibraltar sticks to the comet as it bounces away from the earth. The people who are thus carried off into space take some time to figure out what happened and to design a way home. They build a balloon and then float back to earth when the comet passes close again. Now Verne was way short on science here but really big on the wonder of space travel.

No author, catches my imagination like Verne. I searched the book stores in Berkeley for Verne books (They were not very common when I was a kid). I found an omnibus copy of Robur the Conqueror and Master of the World and a French version of Robur the Conqueror. I tried to read the French version and used the English one to check myself. It was very slow going and while I eventually gave up, I did develop a greater appreciation for humor as it’s found in the French language.