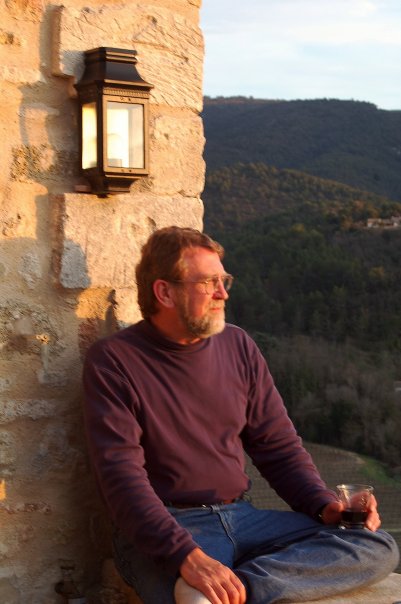 Photo caption:
Paolo Rousselot (Peter Lundquist) in his favorite photo of himself,
holding a glass of his iconic red wine as he looks out over the Luberon Valley from the hilltop village of Ménerbes, France.

June 11, 2015, the Second Life community lost one of its long time residents, Paolo Rousselot. During the eight and a half years he spent in Second Life, Paolo was at various times a builder, a sim developer, the owner of a blues club/photography gallery, the creator of a Native American lodge, an environmental activist, and an active participant in several science and environmental groups, particularly Center Ground, of which he was one of the founders, and The Science Circle, whose programs he religiously attended.

Some of his closest Second Life friends were people he met when they were newbies. Paolo loved welcoming new residents and took time to help them learn how to navigate in Second Life safely.

In many ways, Paolo’s Second Life mirrored his real life, where, as Peter Lundquist, he was a builder (carpenter and inventor), a blues music aficionado, a photographer, an explorer of Native American culture and spirituality, a green businessman, an environmental activist, and man who loved the mountains and tall grass of his Colorado home.

On the Han Loso sim, much of which he owned at one time, he built several homes and a blues club, Blues on the Lake, which included a gallery for the black and white photos he took of blues musicians … greats like B. B. King, Joe Williams, Pinetop Perkins, and Lin Halliday. Several of his photos became CD cover art.

Peter was not a religious man, but he was spiritual and was particularly drawn to Native American spirituality, culture, and history. He attended two Lakota Sun Dance Ceremonies in the late 90s and was powerfully moved by the experience. He and his wife were married in New Harmony, Indiana, on September 28, 1997, in a Native American ceremony conducted by Lakota elder Jim Gillihan, sixth keeper of Sitting Bull’s pipe. The ceremony concluded with smoking that pipe.

In 2007, soon after arriving in Second Life, Paolo constructed a Native American lodge, which was surrounded by trees and wildlife.  In asking people to attend the opening, he wrote, “I would like to extend a personal invitation for you to attend the dedication of Micho’s Wood and the Wisdom of Our Elders Lodge in Han Loso.  There will also be an honoring ceremony for Tatonka Ska (Jim Gillihan), a Lakota Elder, and most importantly a gentle man of peace and wisdom. It has been my hope for some time that I might provide a place of peace, tranquility and learning in Second Life where some of the serious issues we all soon will face can be explored and discussed.”

He wrote at that time, “HeatSaver Thermal Shades stop unnecessary and expensive energy losses through windows, and does so quite simply and effectively.  With the need for serious energy conservation to be at the forefront of all of our thinking we are confident the exposure Second Life offers will enable us to let people know just what a valuable product HeatSaver is.

I opened our first office in Second Life nearly two years ago.  We now have our primary showroom on Han Loso, our office on ViO opened last February, and we recently opened our second showroom on Sunset Arts II.  Thanks to SL we now have real world Sales Agents in four states in the U.S. and the U.K.

This Saturday and Sunday from 12 to 4 SLT each day, we will be holding an Open House on Han Loso.  Stop by and see our operable shades in real world settings!  We can address your energy conservation needs, whether for your home, business, school or municipality.

HeatSaver truly is, “Part of the Solution.”

Concern for environmental issues, energy conservation, and climate change were central to his being, so it was only natural that he became active in environmental and science groups in Second Life. In 2009, Paolo took the lead in organizing a virtual Copenhagen Conference on Climate Change for Second Life, simultaneously and interconnected with the actual Copenhagen Conference. Peter remained passionate about energy conservation and other issues related to the health of the planet, and that became his primary focus during the last decade of his life in both lives. He was active on Etopia and in various other groups dedicated to environmental issues, among them OneClimate and 350 Green Expo.  And he was passionate about The Science Circle, making it a point to attend whenever there was a talk.

After his death, SL friends remembered the role he played in the environmental community in Second Life. Tatyanna Patten said, “As one of his environmental partners (as Tatia Andel) on Etopia and Han Loso in SL, and an active participant in the 350 projects, I loved all the knowledge, idealism, and passion that he brought to our in-world activism. He and Luther Purnell were two of the people I met early on when I joined SL in 2007 and building the sims with them in order to demonstrate various ecosystems and climate change principles were some of the best experiences I had in-world. Peter’s sense of humor and substance in the virtual world made me feel that he was an equally good real life friend. He was a special man and I feel blessed to have known some part of him.”

Through all the years, even after a midlife relocation to Illinois, Peter’s heart and soul remained in the mountains he grew up in. In the flatlands of Illinois, Peter remained a stranger in a strange land, always yearning for the High Country of his childhood and young adulthood. Colorado and the Garden of the Gods was where he learned to walk gently on the earth through the tall grass. In November 2015, his ashes were returned there.

Often, in saying goodbye to friends and loved ones, Peter would say, “Journey well.”