September is a mid-point for the Northern hemisphere season of tropical cyclones. Where I live they are called hurricanes and in other places, cyclones and typhoons. By every name and in every circumstance, these storms can be the very apex of wind, rain and surge.

Overall however, weather is fascinating. We all love rainy days when a good book and hot chocolate calls. A lightening storm is amazing when one is far away from a direct strike. We don’t want to see hurricanes tho. They cause flooding and lose of life. In the US, a hurricane on September 9, 1900 passed through Galveston Island in Texas and submerged the city and killed around 6,000 people. In Sri Lanka, cyclones have passed over the island quite often causing massive destruction. Today (September 14, 2020), there are two hurricanes, three tropical storms and one tropical depression active in the world. Tropical cyclones do not hit everywhere. The map shows the general areas where a tropical cyclone will form and travel. 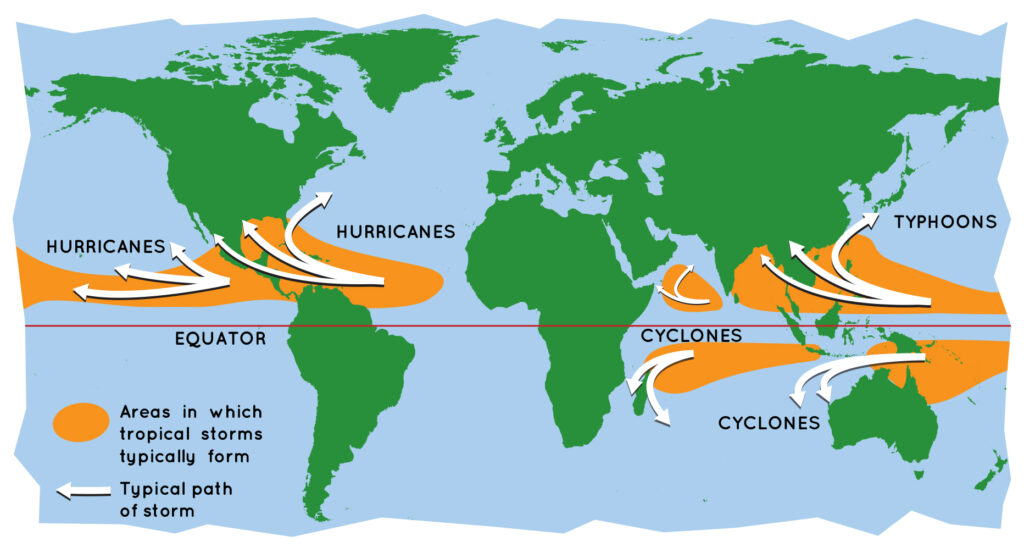 I had two questions about tropical cyclones and I asked Wordsmith Jarvinen if he could help me. (Dr. Keith Eric Grant in Real Life. See A Virtual University Profile – Wordsmith Jarvinen for his background). My first question was why do cyclones rotate? A cyclone is not just wind blowing across the sea but wind created by a titanic mass of water vapor and momentum that is spinning in a huge circle and building upon itself.

Word explains. “Hurricanes can develop when atmospheric low pressure occurs over a region of the tropical ocean having a sea surface temperature of at least 80°F (26.5°C). The pressure is low, because the air is rising. The area must also be far enough from the equator, about 300 miles, that the Coriolis force, due to the Earth’s rotation, is significant. As winds push from high pressure to low pressure, the air absorbs water vapor from the warm ocean. As the air continues to rise, the water vapor will condense releasing energy to further drive the upward convection, often resulting in groups of thunderstorms. Also, in the northern hemisphere, as air tries to move from high to low pressure, the Coriolis force diverts it to the right, setting up a counter-clockwise rotation. If conditions are favorable, the pressure will decrease further and the winds will continue to increase until they reach sustained speeds of 74 mph or more, the threshold for classifying a storm as a hurricane.”

My second question was about tornadoes. Are tornadoes the same as cyclones? They are both rapidly rotating storms that bring damaging wind and rain. What’s the difference. It turns out quite a lot. Word clarified how a tornado is formed. “Tornadoes generally form in Super-Cell thunderstorms, thunderstorms with persistent rotating updrafts. The rotation is a by product of vertical wind shear; changes in wind direction with altitude. Tornadoes are more likely to form when low-level humidity is high. This causes characteristic warm, rear flank downdrafts (RFDs). The RFD air flows into the rotating updraft zone and stretches vertically, enhancing low-level rotation.”

I suggest several fictional sources that may help one to understand what it is like to experience a tropical cyclone.