Matchmaker, Matchmaker,
Make me a match,
Find me a find,
Catch me a catch…

The matchmaker used to be a person. She was almost always a respectable, middle-aged woman who was well known in the community. I am reminded of the Yonkers widow, Dolly Gallagher Levi, from the 1964 musical Hello Dolly! Dolly is a matchmaker who in the end decides to find a match for herself.

These days the classic matchmaker is pretty much gone. There still exist exclusive companies that, for a rather steep price, will give you one-on-one, personal attention in finding a compatible soul mate. See as an example Kelleher International. These days the matchmaker has been replaced by the computer and some fairly sophisticated mathematical algorithms. Some basic examples of today’s digital matchmakers are Match.com or Okcupid.com.

Since the Science Circle is based in Second Life, I wondered if SL offered any dating services. The Second Life Destination Guide on their web site has a Romance category and there are dating services listed. I checked out the Lonely Hearts Dating Service and it was rather lonely. Perhaps I was there at a quiet moment.

Since it’s St. Valentine’s Day, I thought a visit to some of the science behind dating apps would be fun.

A quick Google search for “database building for dating apps” found a number of articles on why and how to build a dating app. Three articles that looked useful and illustrative are listed in the References below.

From those articles I noticed four technical components of dating apps that have really sophisticated scientific underpinnings.

Dating apps have for many years included a video by the applicant that attempts to give potential matches some insights. Some on-line services let potential matches engage in streaming video chats where each person can see the other. Recent advances in facial recognition are being applied to these dialogs and are attempting to deduce if the persons are responding positively to each other. These analyses can be provided later as feedback to help people decide to continue with their match process.

Artificial intelligence (AI) is a catch-all term for making a computer look like it’s thinking. In a nutshell, AI consists of processes that sift thru a lot of data looking for matches and then store those connections so they can be found later. A simple example is a computerized thermostat. It records the temperatures you set at various times of the day and notes the outside temperature at those times. It stores that data and begins to automatically adjust the temperature accordng to the time of day and outside temperature. If the user manually adjusts the temperature, the computer notes the time and outside temperature and adds that to its database. Over time, the goal is to not have the human make any changes. This is a simple example, to make more sophisticated decisions, the system must gather and monitor more variables. The more variables that can be connected into patterns, the better decisions the computer can make.

How to scale up the database and guarantee the capability of the app to handle a large load of customers. This is a terribly important component. Any web site or app works fine with one or twp people using it, but if 10,000 people are using it everything can grind to a halt. The articles by Kousik Nath and Nandhini Saravanan are good starting places for this topic. Basically it’s using a number of parallel processes across many servers and caching temporary data so you only have to fetch it once. Any more on this topic and my brain freezes. Moving on. 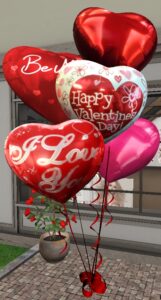 A final key to successful matching is defining the data to gather, storing that data and then mining it. Dali Waverider (RL – Chris Lincoln), a computer scientist and long term Science Circle member, told me of his dating service experiences with a one-on-one company some 30-odd years ago. He mentioned that he took some psychological tests as well as providing extensive demographic information, personal preferences, likes and dislikes, etc. He feels that on-line services must use as much data as possible in order to generate useful matches. He thought Google and Amazon probable have a wealth of information that could be mined to find matches. The basic assumption here is that human behavior and soul mate preferences are the result of the interaction of many, many variables. So, the more variables you can monitor the better you can predict.

Helen Fisher has done research into biological correlates that link to four major components of attraction. Fisher and her colleagues identified four neural systems (dopamine and related norepinephrine system, serotonin, testosterone, and estrogen and oxytocin system) that correlated with four temperament dimension sub-scores on a 56-item questionnaire, the Fisher Temperament Inventory. The dimensions were named: Curious/Energetic, Cautious/Social Norm Compliant, Analytical/Tough-minded, and Prosocial/Empathetic. Their results suggest that 1) biology plays a large role in romantic attraction and 2) these four sub-scores might be useful in predicting romantic attachments.

So, in conclusion I see three ways to meet a soul mate. Find a nice, middle-aged widow with good connections, indulge in a computerized process, or just live your life and see who pops up. I used the last myself. It worked quite well.