In the early 1930’s, a combination of engineering, science and art created spectacular buildings. I’m going to mention two of those buildings as examples but there are many more scattered across the globe. Built in 1930 is the Chrysler Building and following soon after in 1931 is the Empire State Building. Both were the engineering marvels of the world when constructed and they still stand today. When it was built the Chrysler Building was the tallest building in the world. That lasted for a year until the Empire State Building assumed that title. Both buildings have been eclipsed in height by recent buildings but these two stand as testaments to art and science. 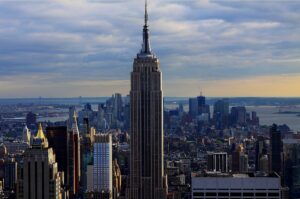 Many innovations in science and engineering made these skyscrapers possible. The key component was the development of steel as it is the steel framework that holds up the building. Following closely were elevators, electricity and indoor plumbing. But beyond science there is art. The Art Deco movement began to emerge soon after 1900. It grew out of the Art Nouveau style and was popular in the 1920’s and 1930’s. It was incorporated into the design of buildings all over the world.

At this point, I must recommend the books about buildings and other structures written and drawn by David Macaulay. His book Unbuilding shows how the Empire State Building might be torn down at some future time and in doing so shows how the building was created in the first place. He has also written more books about how things were built: cathedrals, pyramids, mills, mosques, castles, Roman cities and the underground in London. Five of his books have been made into PBS specials.

One of the goals of the Science Circle is to encourage young people to consider careers in a STEM field. STEM stands for science, technology, engineering and mathematics. While it may not create a new acronym I feel art needs to be added to STEM. Perhaps STEAM. The life of Leonardo Da Vinci serves as an example that science and art are inseparable.

One cannot leave a discussion of the Empire State Building without including King Kong. For many of us, I suppose, our strongest memory of the Empire State Building is watching King Kong carry Faye Wray to the top of the tower. In the references is a link to Peter Jackson’s 2005 version of this journey. This is movie art and art is what makes science and engineering become real.