Attack of the 50 Foot Woman is a 1958 science fiction film about a woman who, through some strange contact with aliens from outer space, quickly grows to be 50 feet tall. 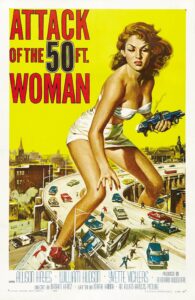 What does a scientist from the 17th century have in common with a movie from the 20th century?

In this column about science, we might say they have little in common but actually the 50 foot woman helps clarify themes put forth by Galileo in a delightful book about physics and the relationships between things, weight and height for example. 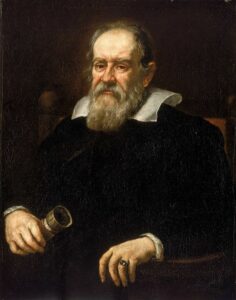 “Despite the publication ban, Galileo published his Discourses and Mathematical Demonstrations Relating to Two New Sciences (Discorsi e Dimostrazioni Matematiche, intorno a due nuove scienze) in 1638 in Holland, outside the jurisdiction of the Inquisition.” (Wikipedia)

The science of materials section of the book “begins with a demonstration of the reasons that a large structure proportioned in exactly the same way as a smaller one must necessarily be weaker, known as the square–cube law. Later in the discussion this principle is applied to the thickness required of the bones of a large animal, possibly the first quantitative result in biology, anticipating J. B. S. Haldane’s work On Being the Right Size, and other essays, edited by John Maynard Smith.” (Wikipedia) 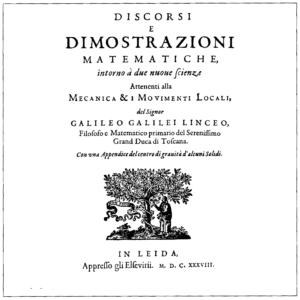 One of the biggest birds are California Condors with wing spans of three meters and the smallest birds, like the Bee Hummingbird, can sit on one’s little finger. However, no bird is as big as an elephant and even if he had wings, an elephant could never fly (Sorry Dumbo).

The earliest of horses were the size of a modern fox terrier. Over millennia horses evolved from a 20 pound animal to a 1200 pound animal, but it was not just a process of getting bigger. Over those millions of years the environment pushed and genetics responded by evolving a survivor. For that tiny ancestor of today’s horse, survival depended on running faster and getting bigger. Horses today are wonders of running and have developed an anatomy that supports a large prey animal living on wide, grass covered prairies. So, today’s big horses did not “just scale up” but evolved all their systems (bones, heart, etc.) to function in a vastly bigger organism.

And, in real life, a human body won’t work if you scale it up to 50 feet tall. The legs will be too weak and the heart won’t be able to pump blood to the brain.