The Lost World is a science fantasy novel written by A. Conan Doyle in 1912. It features my favorite character, Professor G. E. Challenger, and an adventure to find dinosaurs in the modern world. Doyle may have been inspired by the real-life expeditions of Percy Fawett who was seeking a lost civilization called Z in the jungles of Brazil. Fawett never found Z and Doyle exercised his imagination in creating his story but it’s a great adventure. Several films have been made based on the book. My favorite is a silent version made in 1925 that starred Wallace Beery, Bessie Love and Lewis Stone. It features stop-motion model dinosaurs and very early combinations of live action with the dinos. It is very much a foretaste of King Kong made in 1933. 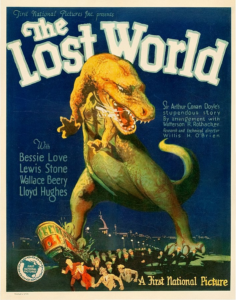 How does this relate to science you might ask? There is a poster for the movie that features a Tyrannosaurus Rex (See image on the right) and quite obviously the drawing is somewhat inaccurate. This is today’s topic: How our perceptions of animals in the tyrannosauroid family have changed since 1925.

Over the last 100 years, many T. rex fossils have been found and a lot more is known about dinosaurs in general and the T. rex in particular. I found several articles that were very interesting on this topic. The article by Brusatte et al (2010) gives a good overview of the expansion of knowledge about these animals that lived millions and millions of years ago. The first T. rex fossil was discovered in 1902 by Barnum Brown and R. S. Lull. For most of that century, knowledge of T. rex was confined to this original find and a limited number of fossils of T. rex and four related species. “Within the last decade, however, the diversity of tyrannosaurs has more than doubled, and during the past year alone (2010), six new species were described, some of which are 100 million years older and 1/100 the size of T. rex.”

The article by Brusatte and Carr (2016) is very instructive as they go into detail how they used mathematical models to refine the family tree of tyrannosauroid dinosaurs. They studied the current dataset on T. rex. This included many more fossils found since 2010 and consisted of the similarities and differences in the physical and genetic characteristics of existing fossils. Specifically, their… “new dataset includes 366 discrete anatomical characters scored for 28 tyrannosauroids and four out-groups. They analyzed the dataset using the traditional method of parsimony and also using Bayesian techniques for the first time. Basically, both methods produced similar results. Their main conclusions were, “Our phylogenies illustrate that the body plan of the colossal species evolved piecemeal [over time], imply no clear division between northern and southern species in western North America as had been argued and suggest that T. rex may have been an Asian migrant to North America.

An interesting look at T. rex’s appearance comes from a computer game, Saurian. I found an article that describes how the computer model for T. rex was revised based on the latest data (Tyrannosaurus Redesign, 2018). I don’t have permission to include an image of their T. rex but go to the link below and see what they did.

Jurassic Park (both book and film) is a more recent story than The Lost World and probably more familiar to my readers. Jurassic Park made the world aware of dinosaurs. “Paleontologist Jack Horner, who served as the science adviser for all five “Jurassic Park” movies, said the depiction of the T. rex is far from reality… ” however “Horner said the number of graduate students looking to work in his field skyrocketed after the movie came out. ‘In the early 1990s I had a hard time getting graduate students to work in paleontology,’ he said. ‘After the movie came out, I was flooded with them.'” (Woodward, 2020).