I personally have no musical skills. My singing voice is totally untrained and I play no musical instrument. Hence, I am in awe of people who have those skills. I often wish I could offer music to others. A long time friend of mine, Ari (Arista Vita) has found a way for the musically challenged to become musical performers.

First, how does music relate to the Science Circle? Well, Ari and I go back over ten years and we met at a Science Circle presentation. He and I developed a very exciting Science Circle discussion on Autism in 2009. Ari is not a scientist and he’s not a musician either. Let him explain. 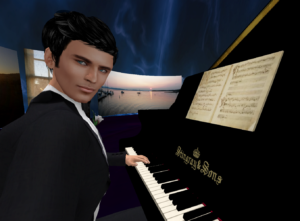 “I have always been shy and though I don’t dance I have always enjoyed attending formal balls. At many of these balls I noticed the presence of a piano and it occurred to me that I would be less likely to be asked to dance if I were sitting at a piano. I then thought that as long as I appeared to be playing, I could play some recorded piano music and make the illusion seem even more real. I worked hard to find the selections and performance styles which most closely mirrored what I would play if I could, and figured out how to “play” the files into the microphone input of my computer. In this way I am able to combine the visual illusion of sitting at a piano in SL with the aural illusion of playing a piano in RL into the microphone. The illusion is so real to me that I feel I am actually playing a piano, giving life to a dream I have always had.” 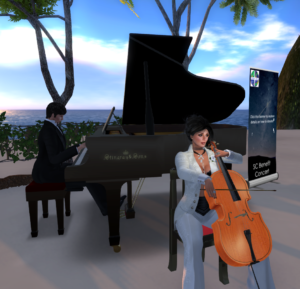 I’ve listened to musicians in Second Life® (SL) quite a lot over the years and I’ve always wanted to understand exactly how this is done. Ari kindly went into detail for me about the process he uses.

“I listen to many versions of a song and when I find one I like I buy it as an mp3 file. Then, I play the file using Musicbee through a DAC (digital to analog) converter. I now have the file in analog form which I can process to enhance the treble for example and then send the audio into the line input port of my PC. I use streaming software to convert the analog audio back to digital form and send it to a remote Shoutcast server which I rent time on. The server then broadcasts the digital signal to a url on the Internet. I put the url into the streaming music url for the parcel where I am performing. This way all present on the parcel can hear the music by simply pressing the ‘music’ button on their SL viewer.”

Ari positions his avatar at a piano and the animations have him playing the keyboard. This combination of visual and aural media creates the perfect simulation of a piano concert. Vita said, “I am always honest about who is doing the actual playing which often inspires listeners to purchase the music for themselves.”

I caught up with Ari at a photo exhibition on the Perfect Paradise sim. There were a number of people there; some looking at the photos on display and others dancing to the music. One of the artists, Moss (visiblydistorted), said, “Ari, your selections flow so seamlessly, I can hardly tell where one song ends and the next begins… It’s just an immersive soundscape from start to finish.”

Ari’s performance schedule is below. It is fairly stable but can change over the course of a few months. His concerts offer mainly classical, popular, and soothing piano pieces, and on occasion he adds an orchestra or strings to play piano concertos or trios.

He feels becoming a musical performer has changed his SL experience. He said, “It has enhanced it greatly as it offers me a chance to make new friends and help others. Many who listen to my concerts say the music helps them relax.”

Monday, 10:00am at  Inspiration Island

Tuesday, 12 Noon at Creations Park (for the Mermaid Ball)