In the 1940’s and 50’s children were getting polio at an epidemic rate. Finally, there were vaccines developed by Drs. Jonas Salk and Albert Sabin. As a kid in the late 50’s, I was fairly unaware that there was a polio epidemic but I do remember getting the vaccine on a sugar cube. I have friends today who had polio as children and who are now re-experiencing polio-like symptoms. The viruses that cause disease among us are very complicated. 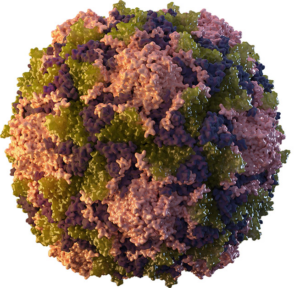 Our bodies are able to defeat the influences of viruses and bacteria via a number of different mechanisms [1, 2,3]. In these days of the Covid-19 pandemic we are hearing a lot about antibodies [4]. If we have the right antibodies inside us then our body can kill off an invading virus. It’s all about antibodies and the vaccines that stimulate their development.

“Immunization refers to the artificial creation of immunity by deliberately infecting someone so that the body learns to protect itself” [5]. That’s what the sugar cube did for me. It stimulated the production of specific antibodies and if I ever encountered the polio virus the antibodies killed it and I never knew. I’m so thankful for those tiny guys deep inside me.

Over the last 60 years, polio cases have almost been totally eradicated from the world. Only a few countries report cases. “Although 88% of infants worldwide age 1 or older had received 3 doses of poliovirus vaccines in 2017, that rate of coverage was only 60% in Afghanistan, 40% in Nigeria, and 75% in Pakistan” [6]. There are active programs to increase vaccinations in these countries to finally eliminate this problem. At this moment, there is a large vaccination program in Pakistan as that country has had recent increases in the number of cases [7, 8].

To ease into the topic of immunization, I recommend two fictional resources.