I was surprised but not upset when Pluto was reclassified from a planet to dwarf planet. After all Pluto is smaller than our moon and there are several other objects out there almost as big as Pluto. It is fascinating to learn however that there might be a large object farther out, much, much bigger than Earth, that could undeniably become the ninth planet.

What is as fascinating as a possible new planet is how astronomers can use math to predict where a planet might exist. Perturbations in the orbits of Mars and Saturn suggested something big in between the two and that led to the discovery of the asteroid belt. Not a new planet in this case but enough small objects creating sufficient gravitational pull to cause the deviations observed. In the case of a possible 9th planet, astronomers are observing deviations in the orbit of Pluto and in some of the bigger objects in the Kuiper Belt or Oort Cloud that lie beyond Pluto’s orbit. Some of these larger objects are also dwarf planets like Pluto. Three of them are Eris, Makemake and Haumea. As yet unknown, the ninth planet lurks there in the dark. Planet number nine might be an icy planet similar to Uranus or Neptune. It may even be larger than these two planets. The graphic below from NASA shows the Kuiper Belt and the orbits of the outer planets. Pluto is the yellow one.

Here is the interesting part. If you want, you can participate in the search for this possible 9th planet. There is a web site called Zooniverse. Zooniverse connects non-scientists, and anyone interested really, with scientific databases that need analysis. Not mathematical analyses but observational and judgmental inputs. Zooniverse is a collaboration of scientists who have databases of “stuff” that require someone to look at each data point and make a decision. The scientists just don’t have the time to do these tasks but if enough volunteers, following careful guidelines and criteria, help out, then progress can be made. 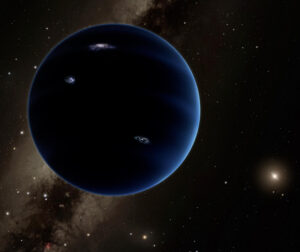 This is similar to one of the SETI activities. Remember SETI is the Search for Extraterrestrial Intelligence and one aspect of their activities (SETI@home) involved non-scientists in sharing their computer cycles to analyze radio telescope data.

Zooniverse has many projects on hand and not just astronomical but projects in the arts, biology, climate, history, language, literature, medicine, nature, physics, and social science. In the case of possible Planet 9, there is a huge database of photos taken by NASA’s Wide-field Infrared Survey Explorer (WISE) mission that need to be examined, one by one, to see if the camera captured a new object. That new object might be the new planet. Follow the links below if you are interested in becoming a planet hunter.

Note: Apologies to The Beatles for purloining from their song, Revolution 9 from the White Album, 1968.

Images of the Kuiper Belt and the possible Planet Nine are from NASA.