Words in a song attempt to define philosophy but like some abstract Buddhist teaching they leave us with nothing definite to hang on to. But these words do point to the fact that philosophy is a bit hard to define because it focuses on ideas that can be abstract and subjective.

Given that thought, we might assume that science, the precise and objective discipline, would be easy to define. I don’t think science can be put in a small box, but for practical purposes I like to consider science to be the discipline of gathering objective information about questions with the aim of identifying possible answers.

Flipping that, I’m happy to consider philosophy to be the discipline that asks questions and considers the possible implications of solutions.

Given those two poles, I think the development of answers to questions is an interactive process between philosophy and science. My mentor considered thinking about a problem to be the most important part of the research process. He said one laid out the steps in the solution as logical assumptions and then found places in the argument where one needed data to support them. Thus, science, with its emphasis on data and objectivity was a supporter of philosophy with its emphasis on logic.

I’m not a philosopher so I wondered how a philosopher would look at the interaction between philosophy and science. Dr. Herman Bergson has been active in Second Life for many years and he gives lectures on philosophy. He was my choice to give the philosopher’s perspective. 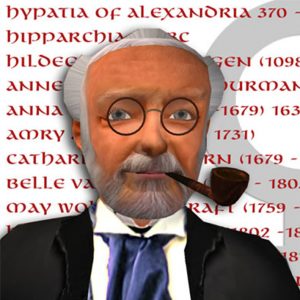 Dr. Bergson graduated in 1977 in philosophy at the University of Groningen in the Netherlands, specializing in systematic philosophy. This is a branch of philosophy that focuses on epistemology, philosophy of science and logic. He was a college professor for 30 years. Now retired, he gives philosophy lectures in Second Life every Tuesday and Thursday at 1 pm SLT. He is approaching 800 lectures.

He said, “In the beginning there was the mind and the mind started to wonder and ask questions. It discovered that the world could be understood by recognizing patterns and underlying principles. This process taught man that some things repeat themselves in a fixed pattern and other things stay uncertain. Thus the wondering created definite knowledge, which we call science.

As Bertrand Russell writes in ‘The Problems of Philosophy‘ (1912), when you ask a philosopher what definite knowledge he produces, ‘…he will, if he is candid, have to confess that his study has not achieved positive results such as have been achieved by other sciences. It is true that this is partly accounted for by the fact that, as soon as definite knowledge concerning any subject becomes possible, this subject ceases to be called philosophy, and becomes a separate science.’ (Ch. 15).”

Turning to the practical realm of education. I have always held a personal suspicion about the recent emphasis on STEM (Science, Technology, Engineering, Mathematics) in both primary and secondary education. Being an artistic person raised by an engineer I’ve always had an appreciation for both the arts and science. I asked Dr. Bergson, his take on this emphasis.

“The emphasis on STEM (Science, Technology, Engineering, Mathematics) in education suggests that only definite knowledge is good (for the economy), but let me quote Bertrand Russell here again: ‘The value of philosophy is, in fact, to be sought largely in its very uncertainty. The man who has no tincture of philosophy goes through life imprisoned in the prejudices derived from common sense, from the habitual beliefs of his age or his nation, and from convictions which have grown up in his mind without the co-operation or consent of his deliberate reason. To such a man the world tends to become definite, finite, obvious; common objects rouse no questions, and unfamiliar possibilities are contemptuously rejected.’ (Ch. 15).”

Stay tuned for the next installment of Hypothesis! On June 15th we will take a trip through the human brain with Dr. Osan Gar.