Skip (Bruce) Dahlgren grew up in New Jersey, on the East Coast of the United States, spending much of his leisure time sailing on the boat his parents had built, as well as observing the natural world & human history. It was quite natural that while a student at the University of Pennsylvania, he dedicated his curriculum to anthropology with an emphasis in archaeology, & on the side studying languages (Russian & French), geology, & other arts. At the end of his four years at Penn, in the summer of 1966, he received a draft notice, but chose instead to make a four-year enlistment in the Army Security Agency, in the hopes of being assigned to further language study. After a year at the Defense Language Institute in Monterey, California, in a total-immersion program in Arabic, he was posted in 1968 to Asmara, capital of Eritrea, which then was considered a province of Ethiopia, where he spent five wonderful years. In addition to his official duties, he took part in four seasons of excavations at important archaeological city sites in Eritrea (Metera, also transliterated as Matara) & Tigray (Yeha & Aksum, also transliterated Axum). He also acquired proficiency in Tigrinya, the local language, & also travelled extensively, keeping an extensive photographic record of his travels & visits, including photos of Yeha from this vantage point on a mountain top in 1971. 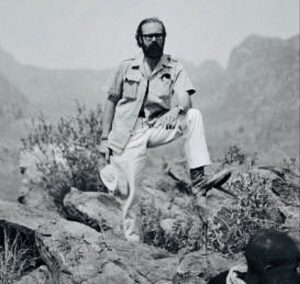 After returning to the United States in 1972, his life took a turn away from archaeology, but he never lost his interest in the study, especially the regions where he spent his time or his love for the people he had left behind. Some years ago he payed homage to the sites & the people in several ways, which included building a virtual reconstruction of the sites where he had worked in Second Life known as Virtual Abyssinia, which unfortunately he was unable to maintain financially. More recently, he posted several videos in Youtube recalling places & events from his years in Eritrea & Ethiopia.

Still more recently, he has been writing a novel which weaves the historical fact of the powerful city that was Yeha & the kingdom of Di’amat of which it was the capital nearly 3000 years ago, along with his own experience living there & in other ways immersing in the local culture, with Ethiopian & Arabic legends about the childhood of a girl who is said by many to have grown up there, & after a childhood filled with deadly challenges grew up to become the woman who legend remembers as the Queen of Sheba. Fifty years after the photo at Yeha, this one shows him near his home in central Arkansas.

Currently he has restored a new & updated version of Virtual Abyssinia in the OpenSim grid maintained by the Science Circle, concentrating on Yeha, building restored versions of the Great Temple (whose walls still stand largely intact & the huge administrative palace that stood nearby, where he took part in the first two seasons of excavation in 1971-1972). Based on information obtained by German archaeologists who have excavated both structures extensively more recently, my current restorations present the best available information about both buildings.

The new Abyssinia includes domestic structures & other elements that would be expected to have been found in Yeha at the time. There are also small nods to other places that will be given more attention in the future.