I grew up around scientists. My father was an engineer who designed and implemented complex instrumentation for scientific research at a Carnegie R1 university. He was also an amateur astronomer. As an only child, I spent much of my time with scientists, allowed to “follow around” on field work and freezing in domes open to the cold night sky. My becoming some sort of scientist was a forgone conclusion if not somehow pre-ordained.

Most people don’t get that sort of focus. Everyone of us however needs something to inspire us, something to reach out for and grab. The long running television programs and motion pictures of the Star Trek franchise could be part of that inspiration.

I could not find any systematic studies on the direct influence of watching Star Trek and going into a STEM career (STEM – Science, Technology, Engineering, Mathematics). I did find several articles where the author gave Star trek credit for inspiring their choice of a scientific career.

A few years ago the National Aeronautics and Space Administration and the American Society of Mechanical Engineers held a Star Trek Competition for students to design prototypes for use in space. This competition drew on the lure of Star Trek to appeal to kids. I guess it worked. The competition was a success.

If watching Star Trek can be inspiring, then might not actually participating in a space voyage be better?

Second Life offers the opportunity to actually engage in Star Trek role play. There are many groups and sims devoted to Star Trek themes. I asked Cassaundra Garrett (silvercassie) to tell me about her group’s endeavors.

Cassie is a school teacher but her Star Trek connection goes back to childhood. She explains, “I got involved with Fasa’s Star Trek RPG {role play game} ages ago when my older brother was game-mastering it. I had already watched the show with Kirk and Co. before TNG {The New Generation} and Picard came up. So they are kind of my childhood heroes.”

She went on to explain the personal rewards she gets from Star Trek role play.

“Well… Star Trek is about peaceful exploration. Weapons are the last means to be applied. I’m a fan of diplomacy, mutual agreements and, of course, science. Lots of Star Trek stuff has meanwhile become real. Be it communicators in the form of smartphones or smartwatches, tablet computers, flat-screens, hypos, and so on and so on. I remember my Dad telling me as a kid that all of this was Sci Fi and would never become real. And now we use the stuff in our everyday lives. So Star Trek gadgets have always been way ahead of their time… and hopefully will be.”

Cassie and her role play colleagues wanted to return to the original series and decided to build their own spaceship. She explains, “The idea came up about a year ago. I was fed up with all the canon stories in our Next Generation role play. It was full of you can’t do this and you can’t do that because in the TV show it was … and so on. So I wanted to return to a time free of canon and without the burden of hundreds of TV shows. The Kirk era has always been an era that inspired me and gave me a sense of wonder. Space was the final frontier… It felt like being one of the American explorers going westwards to discover a whole new world. The challenge about it was that there are only a handful of the old series and that the marketplace doesn’t sell many props. So we had to build the ship from the scratch. Every panel and every console, every table and all. The other thing was a copyright question. We didn’t want to violate any copyrights connected with the show… so our ship is no Constitution Class but a custom built one that we call an Eclipse Class Cruiser.” 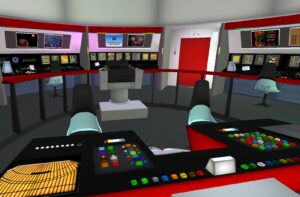 “The other question was if we should build the ship in one hull or not… as we wanted it to be life-sized. After lots of experiments we found out about the perfect use of space that the hull offered and realized that it would really be life-sized. We even have lots of space left for further extensions.”

Finally, I asked her about the potentials for Star Trek role play in SL to foster an interest in a STEM career? She offered a thoughtful and insightful assessment of the potentials and limitations.

“The main issue is that most of the second life players are too old to start a new career. And honestly: Most of the sites and people in SL do adult related stuff. We would desperately need areas for young people to inspire them to start a STEM career. The other issue is that SL is very time consuming if you want to create your own content. It takes me about two evenings/week to set up a 3 hour role play adventure. Young people are consumers… They want to enter a complete setting (like in World of Warcraft or Star Trek Online) and enjoy what they get there without too much work on their characters. SL Star Trek demands good contacts with people, good friendships and serious teamwork. Those are qualities that our fast paced, real lives hardly offer nowadays. So I’m afraid we aren’t able to inspire new people… Yet what we can do is carry on and try to show people that there’s more about SL than sex, BDSM and dancing.”

I’ve always been a fan of Star Trek. During our pandemic isolation, I’ve worked my way through several seasons of Star Trek: The New Generation and enjoyed every episode. I feel the movie, Star Trek IV: The Voyage Home (1986), where the crew has to go back in time to get whales in order to save the earth, is a wonderful teaching tool for the unintended consequences of environmental shortsightedness. Spock quieting the annoying punk rocker on the bus is also an example of what I’ve wished to do on occasion. Beam me up, Scotty!