It seems, these days, that environmental studies are more political than scientific.

Friedrich Nietzsche said, “He who fights with monsters should be careful lest he thereby becomes a monster. And if thou gaze long into an abyss, the abyss will also gaze into thee.”

I’m not going into the abyss of our environmental issues but I do say that science has made a convincing case for the preservation of natural spaces. A most valuable natural space lies under the ocean waves in the form of coral reefs. Coral reefs are lovely to see and provide for an amazing abundance of plant and animal life.

Coral reefs have been dying of late. It turns out that they are very fragile and if the chemistry of the water changes for the worse, the coral up and dies.

The Abyss Observatory was co-created by Hajime Nishimura (Yan Laura in Second Life®) and has evolved into a wondrous world devoted to the oceans. Nishimura has involved many other scientists in developing the Abyss Observatory. One such collaborator is Linda Morris Kelley (Delia Lake in Second Life®). She is an ecologist and takes the health of the oceans and all the life therein very seriously. She is very focused on sustainability. Such a valuable word. The oceans are our most valuable resource and any decision to reach into that resource must not allow that resource to be diminished. Hence, sustainability is the word.

Kelley has been active in Second Life® for 13 years. Her activities  include, “Besides enjoying time with friends in SL, I work in 3 areas: building representative natural habitats and talking about the ecology, now mostly at The Abyss Observatory (Earlier at the Center for Water Studies for about 8 years); curating art exhibits at MoCA Neufreistadt; participating in developing democratic community, such as the Confederation of Democratic Simulators.”

Kelley is a habitat curator with the Abyss Observatory. She talked about her builds, “I have installed three climate zone builds there with each including more than one habitat. Each has undersea and coastal habitats. For example, the tropical has undersea coral reefs plus a mangrove forest and a temperate eucalyptus regnans (mountain ash) tiny forest. Moving north undersea, there is a kelp forest. On shore above the kelp forest is a rare coastal oak and holly forest. So each undersea area also has a coastal area above it.”

At the Abyss Observatory, I visited the tropical coral reef and seaweed forest. There are walkways that take you under the waves where you can explore. No diving or breathing gear is needed as the walkways ingeniously supply oxygen. Here you can see coral and other ocean plants. Also, there are jellyfish, whales, and many species of fish. I made friends with a Giant Moray Eel. 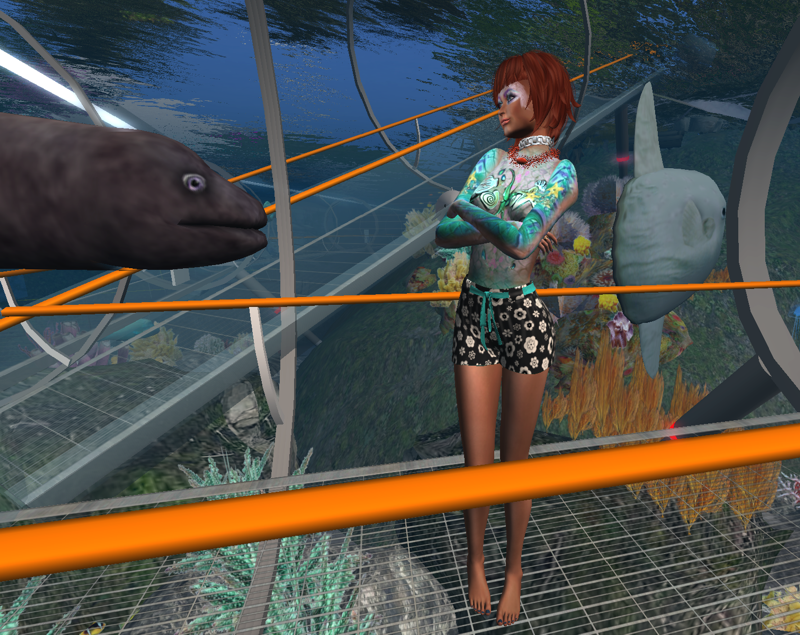 Kelley has a book designed to help people to engage in environmental activities.

She said, “My book, is titled The Sustainable Enterprise Fieldbook. My approach to sustainability is from a systems perspective: business is nested within societies that are nested within the natural environment. The book draws many examples from business but not entirely so. And in it we try to frame the business operations within the social and environmental.

Because so many people today are urban dwellers who are only tangentially connected to the natural world. SL is unique in that we can have immersive experiences along with learning information. Over the years I have seen the real value of experiences in SL. For instance, swimming underwater through a kelp forest, looking around at the marine life there, being nudged by a shark, creates real feelings and memories of “being there.” And in a small way gives people who cannot have these experiences in RL a sense of what it is like and why it is valuable, and why we should care… “

Addenda – Regarding what Deepy is wearing. Since this column dealt with the oceans, I decided I needed to explore the Abyss as a mermaid. I discovered that my mermaid outfit from 2013 no longer worked with my Maitreya body and Catwa head. A brief scan through the Marketplace did not find a perfect mesh alternative. I did find a upper body tattoo and makeup that gives a “mermaid-like” impression. That’s what I’m wearing and here’s a link: Maitreya Catwa Mermaid Complete Set.