The image of the health care provider wearing Personal Protective Equipment (PPE) has become very common during the current COVID-19 pandemic. I see a striking similarity between the image of the modern care provider and an earlier physician called “the plague doctor.” Please look at the two images below to see the commonalities. 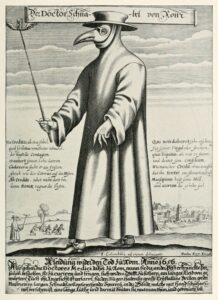 The modern PPE mask and clothing (photo on the left) is based on our scientific understanding of how diseases are spread and serve two purposes. First, PPE keeps the care provider safe from contracting the disease from the patient. Second, should the care provider be a non-symptomatic carrier, the PPE prevents the further spread of the disease.

The more unusual garb of the plague doctor (picture on right) was meant to serve the same purpose as our modern PPE. It was however designed based on earlier assumptions of how diseases were spread. This gear was supposedly created by a French physician, Charles de Lorme, around 1620 or so. The costume was “… intended to prevent a doctor from becoming ill with bubonic plague when visiting sick patients in quarantine.” The long nose of the mask was filled with herbs meant to purify the air. The overall effect was probably sufficiently scary to keep everyone at a safe distance. The original concept of “social distancing.” 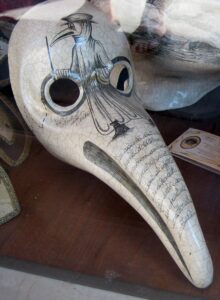 The costume evolved into a commedia dell’arte character called Il Medico della Peste (The Doctor of the Pest). This character wears a distinctive plague doctor’s mask. I don’t know how the costume became associated with the commedia as I cannot find a suitable reference. The Venetian mask has a hollow beak and eye-holes covered with glass. It is also a popular mask seen at the annual Carnival of Venice.

Our modern version is more effective and has come to mark the heroes of our current situation. 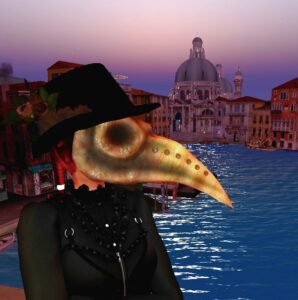