The Earth is over four billion years old. How do we know this? There are no written records because no one was around to write them. A lot of people have spent a lot of time applying observation, logic and inference to determine how old the earth is and how things evolved here. A handy guide to this 4.56 billion year fossil record is the illustration below. 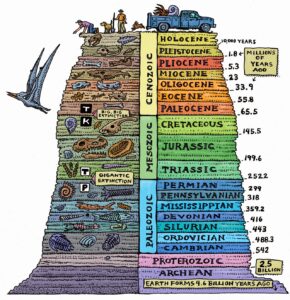 I asked Dr. William Schmachtenberg (Dae Miami in Second Life) to explain how this vast timeline was developed.

“The geological time scale was originally based on the bible and had three eras: primary (before the great flood), secondary (during the great flood), and tertiary (after the great flood). Of these time periods, only the Tertiary remains. Radiometric dating and the sequence of fossils in rocks of certain ages was used to make these time periods. For example, the Devonian was based on rocks from Devonshire, England. There was a geologic time scale based on sedimentary rate calculations that turned out to be pretty close to radiometric dating.”

This process has not been a smooth path from a protein molecule to humans. There have been bumps in the road in the form of mass extinctions. We all know about how the dinosaurs were wiped out (more than likely) by a meteor or asteroid about 65 million years ago.

Dr. Schmachtenberg has done some recent work one of the oldest mass extinctions, the one at the end of the Ordovician period.

“There have been at least 5 mass extinctions in the geologic past and some say there was a sixth. Multiple theories from volcanism, plate tectonics, biotic interactions, and changes to ocean chemistry have been proposed for these extinction events. Local field studies in Virginia have shed light on the Late Ordovician extinction when 86% of animals in the ocean perished.”

The fossil record, as depicted in the illustration above, is not as regular or linear as the illustration might suggest.  Scientists find layers of material of varying ages in different locations. Thus, it is a real detective process to determine the period to which a strata of rock or group of fossils belongs. For his studies in Virginia, Dr. Schmachtenberg said, “I used both sedimentary rate calculation, which is estimating how long a sequence of layers should take to form, and data from radiometric dating studies.” For the results of his work, you need to attend the seminar where he will discuss these data at a Science Circle presentation on September 7, 2019 at 10am PDT.

Dr. William F. Schmachtenberg has a bachelor’s degree from Cornell University and a Ph.D. in paleontology from the University of Chicago. He has taught at the high school and college levels. His main interest has been to use fossils to determine the past locations of tectonic plates.

There is at least one place in Second Life were one can explore a few of these past epochs in Earth’s history – Prehistorica Worlds.

To explore the Prehistorica worlds – Once you are at the SL sim, follow the signs to the Time Machine and walk into the portal when it appears. Once in the Time Vortex, simply walk into any portal you find interesting to travel to that zone. There you can explore, meet dinosaur bots, or even ride a Gallimimus, Pteranodon or Plesiosaurus!

As you are entering the Time Machine, you will be offered a free Time Traveler pressure suit. This is like a space suit but its function is to protect the past not you. The suit isolates you from the past environments. Should you introduce microbes from the 21st century you might be the cause the next mass extinction.