I’ve been thinking about black and white recently. When I was in college I worked for the college newspaper. All our photographs were in black and white. That was cool because not only did I take the pictures I got to develop the film and print the photos.

Black and white pictures are lovely. They are not realistic really as our world has colors. And that brings me to today’s topic – color. What is color? Since I can make pictures in color or black and white or even in infrared, are colors intrinsic to the objects we see or are they some “trick of the light?” 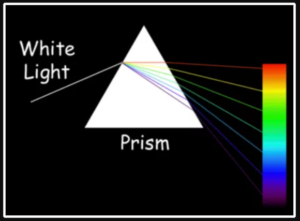 That’s it! Color is light. And light comes from heat. Everything that is warm gives off light. For today’s purposes light is a wave and light waves have frequencies that change with temperature. Different frequencies are seen as different colors by our eyes and cameras. To human eyes, shorter wavelengths are blue and longer ones are red. The other colors lie in-between. And beyond what we can see are radio waves that are very long wavelengths and gamma rays are very short. The radio waves are not created by heat but by magnetic fields. All the rest have heat involved, even gamma rays which are created by exploding stars.

Another part of the color of things has to do with absorption. Objects appear as a color depending on 1) the light reflecting off of them and 2) their temperature. Objects both emit and absorb light but usually they only absorb some of the light frequencies. A hot electric stove element glows red with heat but when cold it looks black or dark gray. The color we see depends on what light waves are reflected from the object. Black objects are absorbing all the light while white objects are reflecting all of it.

Colors also depend on our eyes or the camera. Humans and other mammals don’t “see” the same colors. Humans are said to have trichromic vision. We see three channels of color (red, blue and green) and our brains make up all the colors from these three. Horses, for example, only have two channels (blue and green) so no red. Red things look green to horses. Cameras are sensitive in the same way as eyes. Modern color digital imaging uses the red, green and blue channels but early color photography used a two channel (red and green) color process. Black and white film, of course, is simply capturing shades of gray.

2 comments on “Color or Lack Thereof”