As I was looking through the documents about Operation Moonwatch for last month’s column, I came across my father’s name and the names of several of his friends. One person who was involved in the initial organization of the amateur astronomers was Armand Spitz. Dr. Spitz was an inventor of a small planetarium mechanism that was fairly inexpensive and very popular with schools.

That’s another memory from my childhood introductions to science. As a kid I was taken to a planetarium in a large nearby city. Going there was a big deal as I remember. At the time I thought, “Why not just go outside and look at the stars?” Kids don’t get it.

Now I have an understanding of the educational value of being able to control the star and planet presentation as a teaching tool and an appreciation for the mechanical and optical genius behind the early mechanisms used to project the star field.

Now-a-days a planetarium is an animated series of digital images projected onto a dome but originally they were fantastically complex mechanical mechanisms that projected individual stars and planets and moved them across the dome in realistic ways. I love steampunk and such mechanical wonders fascinate me. Too bad they were never made of copper and powered by steam.

The first large scale opto-mechanical projectors were made by the Carl Zeiss company in the early 1920’s. Walther Bauersfeld and his staff at Zeiss developed the first model for Oskar von Miller, founder of the Deutsches Museum, in 1923. Other models followed. These were large devices with lenses that focused the planets and electric motors to move the sky-field. Still in business, current Zeiss planetarium systems are hybrid in that they combine “the brilliant starry sky of the optical-mechanical projector with digital fulldome video projections.” (Source)

Armand Spitz was a dedicated amateur astronomer. At one point in his life he was working at the Franklin Institute where he held several educational positions. At that time (1930-1940’s) there were very few planetariums in the world and the mechanisms were very expensive. Spitz designed an simple planetarium projector using a dodecahedron shaped ball for the star fields (see photo). He marketed his projector and was very successful. Over the years he 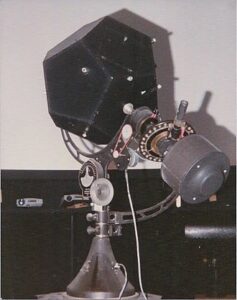 developed more sophisticated models and a really inexpensive model for use in the home. His work made planetariums widely available to schools and other institutions. Current Spitz planetariums are built around digital projectors and are no longer based on opto-mechanical mechanisms.

The Science Circle sim has a planetarium. It was created by Dr. Rob Knop (in SL known as prospero.frobozz). This planetarium is a computer program that creates a star field in a virtual world. It has no mechanical parts and to the inhabitants of the virtual world it is just like going outside to “look at the stars.”

I’m guessing that the ultimate planetarium may be Space Engine. This is “The world’s first science-based photorealistic interactive 3D planetarium that models the entire Universe, using procedural generation for uncharted areas.” Steam is a gaming platform and Space Engine creates a 3D universe for one to virtually explore. I’ve not tried this but it does look fascinating.

Hypothesis is a member of the Second Life Blogger Network. Staff at Linden Labs create “summaries of and links to curated posts selected from participating bloggers.” Two recent posts in Hypothesis have been featured: Return to the Abyss (October 2019) and A Virtual University Profile – Wordsmith Jarvinen (February 2020).