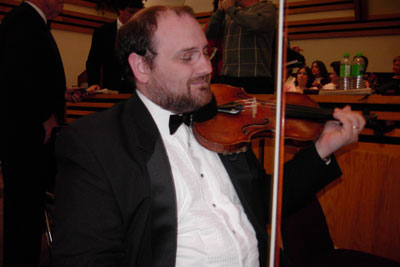 Professor of Physics at Westminster College, a small liberal arts college in Western PA. As Westminster is an undergraduate teaching-focused college, Rob’s primary effort goes to teaching both physics major and general education classes— in physics, but also in topics such as the development of science during the Renaissance. He also performs research with undergraduates in areas of computational astrophysics.

Rob Knop obtained his BS in Physics from Harvey Mudd College in 1990. His PhD came from Caltech in 1997 with a thesis on infrared spectroscopic observations of Seyfert Galaxies. He went on to a post doc with the Supernova Cosmology Project from 1996 through 2001. There, he became a core member of Saul Perlmutter’s team, and participated in the 1998 discovery that the expansion of our Universe is accelerating; this discovery would go on to win Perlmutter the Nobel Prize in 2011. The larger team (including Rob) were also co-recipients of the Gruber Prize in Cosmology in 2007 and the Breakthrough Prize in Fundamental Physics in 2015..

From 2001 through 2007, Rob was on the faculty at Vanderbilt University. Between 2007 and 2009 he was temporarily out of physics, and worked as a computer engineer for Linden Lab, the makers of the Second Life virtual world. During this time, in Second Life he participated in the MICA project (Meta-Institute of Computational Astronomy), a group of astronomers working on using virtual worlds as a scientific collaboration and public-outreach platform. From 2010 to 2014 he taught at Quest University Canada, before returning to the US and Westminster college in 2014.

Rob has in the past worked in both observational infrared astrophysics and observational cosmology. His research now focuses primarily on computational astrophysics, working with the AMUSE package developed by other members of the MICA collaboration. He also does side projects in other areas of computational physics (including a current project building a computer model of simple rolling friction in a wheel).