I asked each scientist to describe their grid and to explain their goals. So, the texts below are quotations from them. Links to their grids and links to further other information are in the References below.

Virtual Abyssinia is in the process of being expanded by the addition of an Aksumite palace (ca 4th-6th century CE), set at the Eritrean site known as Metera, containing elements from palaces excavated there as well as at Qohaito, another important Eritrean site, & at Dungur, a site outside of Aksum in Tigrray. Further additions will include the hawulti (stelae) & stone thrones of Aksum, the 9th century church at the Tigrayan monastery Debre Dammo, the port city Adulis, & perhaps the source of the Blue Nile.

Virtual Abyssinia is intended as an archaeological museum, an introduction to the history of an important region which at least twice contained kingdoms that were seen as world powers of their time, & which now are largely forgotten. 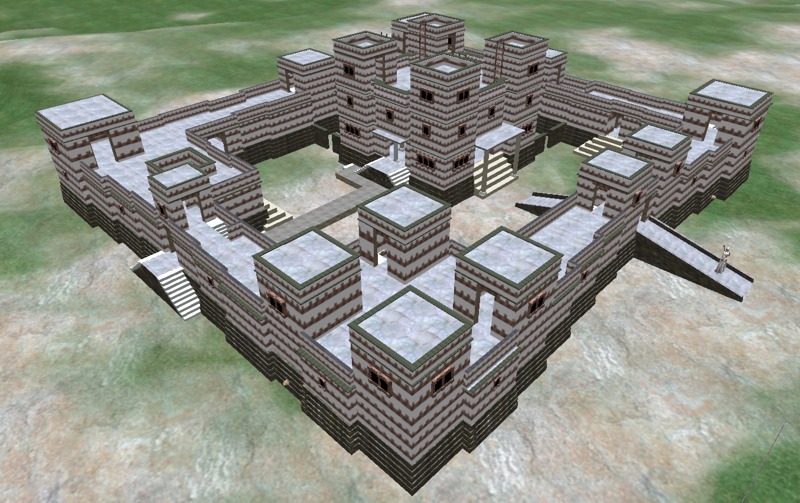 I have primarily relied on word of mouth to advertise my build, especially at times when I was scheduled to present tours. I also have saved links to the description of my build on the Science Circle webpage, the informational page describing how to gain access to the Science Circle grid, & the Youtube video of one of my tours, which I give to interested parties. Of course, any publicity provided by Chantal is greatly appreciated.

I have longed for the opportunity to reconstruct my original Virtual Abyssinia, which I built on Second Life thanks to the financial support of.a friend whose departure forced me to abandon the project. The new build on the Science Circle grid on OpenSim is a wonderful opportunity, but access to the cite is limited compared the possibilities if it were on Second Life. I would immediately seize the opportunity to build a new site on SL, but financial limitations prevent me from doing so. 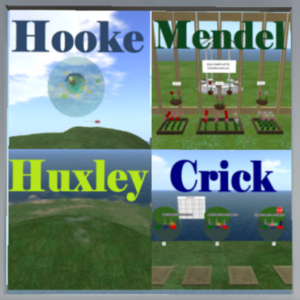 At the entrance to Mendel’s Garden Path is an aerial map of the 11 activity areas located along the Garden Path. Three of the stations are: the Monohybrid Cross, the Cattery and the Mixollama Herd. Crick Island is divided into several sectors. Four of these are housed in buildings in different quadrants of the island: Human Genetics, Historical Genetics, Fly Base and the Crick Pavilion. Connecting these structures are Ribosome Row and several Genome Galleries. At the center of Crick Island is Chromosome Hill, which contains scale models of all 24 human chromosomes. The focal center of Hooke Island is two scale models (more or less) of prokaryotic and eukaryotic cells. 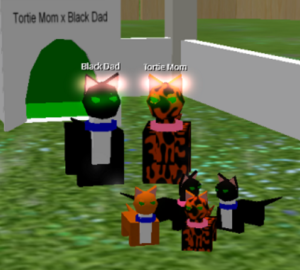 All of these activity areas are interactive and were designed to be used by beginning university or even high school students or just anybody interested in genetics.

Nova Archaeology Island contains five virtual archaeological experiences based on real life historical
and prehistorical investigations and research. It’s designed as an interactive museum exhibit. While some sections are primarily of interest to researchers and students, the island can be an interesting destination for others looking for a different kind of adventure. The goal, in addition to enhancing the students’ educational experience and research, is to create new ways to present information about archaeology for a general audience. Ultimately, we hope the area will be utilized with more teachers and students as well as the general public. We have marketed this build through functions with the educational groups represented on Second Life and OpenSim to generate interest. 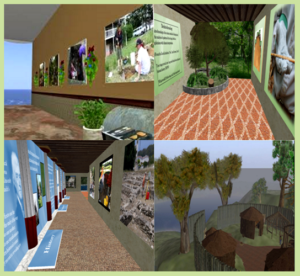 OpenSim does not supply a viewer. Their web site lists a number of third-party sources and the most common is Firestorm. I’ve used Firestorm for years with Second Life and the same version of Firestorm used to support Open Sim as well. Recent builds of Firestorm have an additional version, FirestormOS, for OpenSim. This version does also support Second Life but apparently not all the most recent features. I’m using FirestormOS for Second Life and it seems fine to me.

Is OpenSim a competitor to Second Life? This is from the OpenSim web site, “OpenSimulator can be used to simulate virtual environments similar to Second Life™. However, OpenSimulator does not aim to become a clone of the Second Life server platform. Rather, the project aims to enable innovative feature development for virtual environments and the Metaverse at large.” This is exactly how the Science Circle is using OpenSim, as a way for scientists to explore building innovative settings at low cost or basically for free.