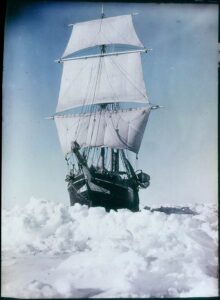 The story of Ernest Shackleton’s expedition to the South Pole in 1915 has been a landmark in Antarctic history. Shackleton sailed with 28 men on a stout ship, the Endurance. The goal of the expedition was to cross the Antarctic continent, via the South pole, from Vahsel Bay to the Ross Ice Shelf. The ship never reached Antarctica. Early in 1915, it got stuck in the ice on the Weddell Sea and was eventually crushed by the ice and sank in November 1915. The men of the expedition lived on the ice for six months, sailed to Elephant Island, and Shackleton, Frank Worsley and four others took an open boat 800 miles to a whaling station on South Georgia Island. Every man who sailed on that ship got home safely. The story set the world on fire with praise for the heroes.

Right now (March 1, 2022) another research ship is in the Weddell Sea looking for Shackleton’s lost ship. The people on this modern research vessel are attempting to find the wreck of the Endurance in 10,000 feet of freezing water. Several previous attempts to find the wreck have been unsuccessful. Perhaps this current one will find the wreck. You can follow the progress of the 35 day expedition, that began on February 14, 2022, in pretty much real time, by going to the expedition’s web site. See link below. 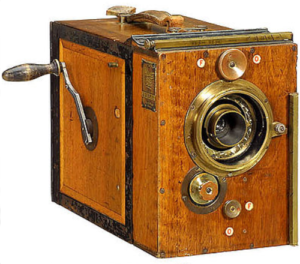 Such stories from the past usually never have many pictures to document the trials and tribulations endured during the journey. This expedition benefited from the technology of motion pictures. Frank Hurley came on the expedition to record it on film and record it he did. His film was edited into a movie, South, released originally in 1919, that is the most amazing “reality show” ever. See references for obtaining the film.

On the left is the Debrie Parvo 35mm motion picture camera that Hurley carried with him on the Shackleton expedition.  This hand cranked camera was patented in 1908 and held 600 feet of 35mm film. It was used by many silent film directors up until the advent of sound pictures.

2 comments on “The Search for Shackleton’s Ship”